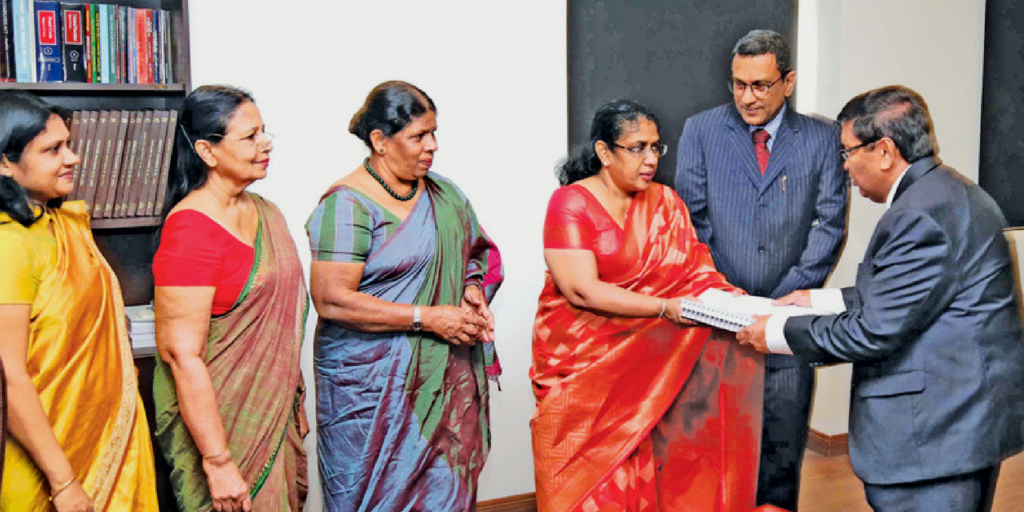 Muslim Personal Law Reforms Action Group (MPLRAG) is deeply disturbed and concerned by comments of Minister of Justice Thalatha Athukorale, in recently quoted statements regarding reforms of the Muslim Marriage and Divorce Act (MMDA) published on July 6th on the Jaffna Muslim website, in which the Minister commented that the Ministry is not able to take the reforms process forward because there is divided opinions among members of the 2009 Committee appointed to propose amendments to the MMDA.

As evidenced by the Committee report, there is a diversity of opinions among Muslims in Sri Lanka owing to a broad spectrum of views on Islam and gender equality. This by no means should be an excuse for the State to delay or limit action in pushing the reforms process forward. We believe that the State, can and must weigh in at this time, particularly as it involves principles of equality and justice for its citizens.

Therefore it is concerning that the Minister, rather than assume responsibility and proceed with reforms by commencing the legislative process, is passing it back to the community that demonstrably holds different view points on matters of fundamental rights.

Meddling by detractors must stop

The MMDA reform process dates back to the 1970s when the State of Sri Lanka appointed the first official Committee to propose reforms. For decades, committee after committee has submitted reports with recommendations to the State, which have not resulted in any concrete action. The most recent report by the 2009 Committee was submitted by the Chairperson of the Committee, to the Minister of Justice in January 2018 – 9 years after this Committee was appointed. However, 7 months later there is still no official release by the Ministry of Justice.

The absence of an official release and commencement of the legislative process gives room for interference by detractors and those who are against some of the positive positions put forward in it. We believe that continued non-publication of the report and not initiating a pubic debate towards legislative reform based on the recommendations may give rise to back door machinations aimed at coercing consensus.

We fear that this might make it possible to target the more progressive positions based on Islamic jurisprudence articulated in the report and bring undue pressure on those that have signed up to these positions. This would be disadvantageous for women and children. The fact that several of the recommendations are positive and that consensus has been reached in the Committee on a number of issues cannot be ignored. Lack of transparency will put in jeopardy this foundation and the hard work of the committee.

In calling for consensus on the remaining contested recommendations from Committee members, the Minister is regrettably playing into the hands of those who want to scuttle he reform process. The stated positions on some of the recommendations that are the subject of dissent are contradictory and conflicting and cannot be resolved by pitting groups with divergent views against each other. The incompatibility is due to deeper reasons to do with the different approaches to Islamic jurisprudence, the inherent diversity among Muslim communities in Sri Lanka and (patriarchal) worldviews.

One such issue is whether or not Muslim women can be appointed as Quazi (judges), marriage registrars and Board of Quazi members, and yet another is whether or not the MMDA should apply uniformly to all Sri Lankan Muslims regardless of which madhab (school of thought) they belong to. Pushing for consensus may in fact lead to compromises made under pressure, the consequences of which will adversely impact Muslim women and girls the most.

It also must be noted, that the positions on which consensus has already been reached must also be further deliberated in light of national laws and Constitution, as well as international human rights standards and Sri Lanka’s obligations. These recommendations should only form the first step in the process of amending the provisions in the MMDA and should involve consultations with Muslim women’s groups and others as the process moves forward.

State has the ultimate responsibility to uphold justice

We take this opportunity to remind the Minister and the State of Sri Lanka that each day of delay potentially victimizes a Muslim women or girl. Each day of delay has a cost.

Can the cost of the last 7 months, the last 9 nine years, the last 48 years of no reform to the Muslim community be quantified or even justified? How much longer do Muslim women and children have to wait before our rights are granted, our equality recognized and our grievances redressed?

Despite the opinion of patriarchal Muslim scholars, like those who have given dissenting recommendations in the report, there is enough evidence in Islamic jurisprudence and legal tradition in favor of the most progressive reforms, as evidenced by the worldwide trends in reform of discriminatory Muslim family laws towards more egalitarian laws that guarantee equality and justice for Muslim women and men.

There is no rationale as to why Sri Lanka should continue to condone discriminatory laws or practices or make piecemeal and band aid reforms that will not resolve the most pressing injustices that Muslim women and girls face in Sri Lanka today, and in turn cause graver harm.

Therefore the best way in which the final decisions can be made on all of the Committee’s recommendations, especially the ones the Committee is divided on, is taking into consideration Muslim women’s lived realities and experiences and constitutional and international human rights standards, which the Sri Lankan State has the responsibility to uphold, regardless of diversity of opinions within Sri Lankan Muslim communities.